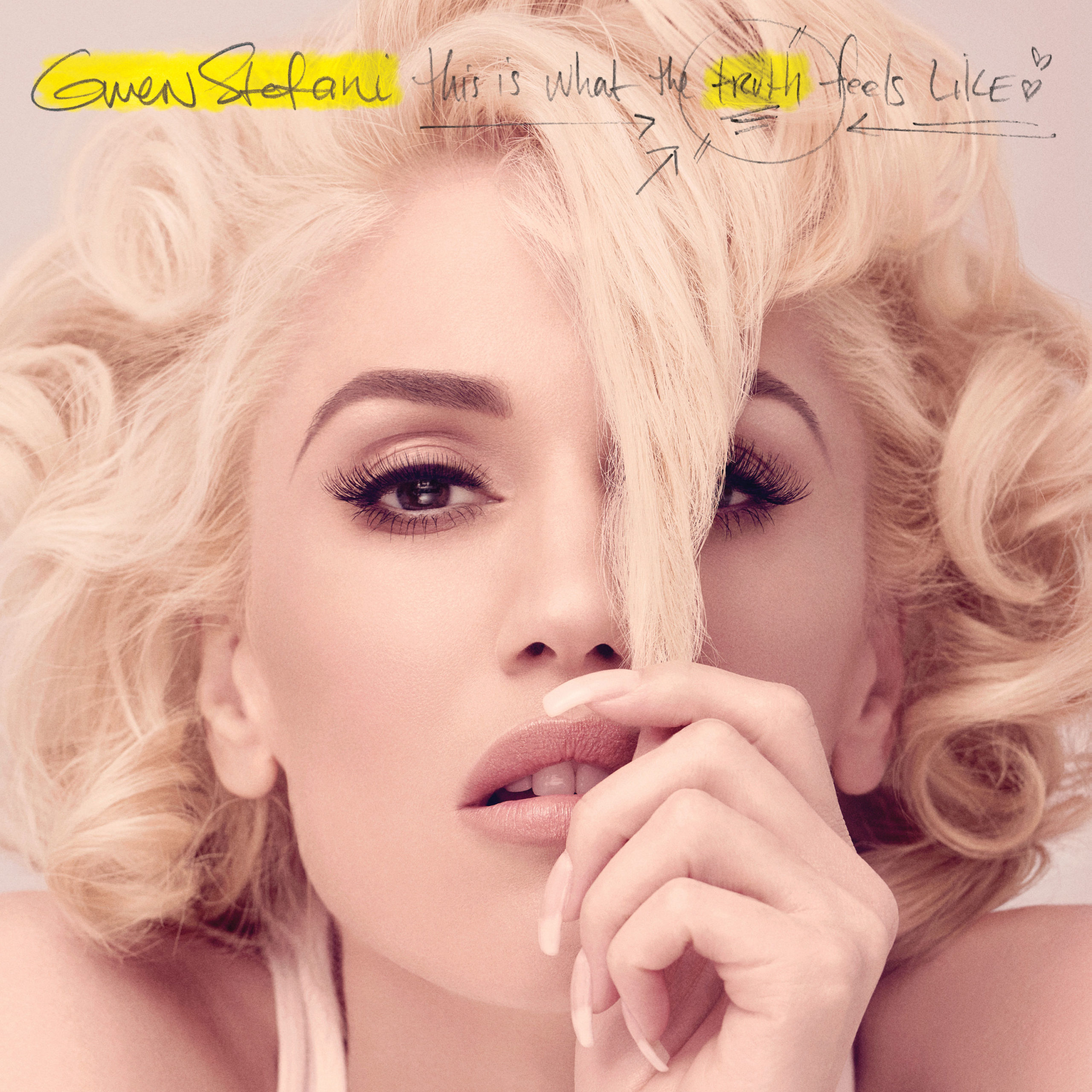 Welcome to the start of the weekend – New Music Friday! This week we have a ton of new releases, including Gwen Stefani’s album, “This is What the Truth Feels Like”, and Soul Asylum’s “Change of Fortune”. Thrice’s lead singer, Dustin Kensrue, released a solo album this week called “Thoughts That Float on a Different Blood,” that we’re pretty excited about! Also on the list are The Word Alive, Jordan Smith, Iggy Pop, plus much more. Check out the videos right here and let us know what you will be rocking out to over the weekend. Enjoy the new tunes, GoStoner Nation!

This Is What the Truth Feels Like is the third studio album by American singer and songwriter Gwen Stefani. It was released on March 18, 2016, by Interscope Records.[1] Initially, the album was scheduled to be released in December 2014 with Benny Blanco being the executive producer and the songs “Baby Don’t Lie” and “Spark the Fire” being released as singles. However, after the underperformance of both songs on the charts and the writer’s block Stefani suffered, she scrapped the whole record in favor of starting again.

Inspired by the end of her marriage and the roller coaster of emotions she experienced during the time, Stefani returned to feel inspired and started writing new and meaningful songs. With the help of producers J.R. Rotem, Mattman & Robin and Greg Kurstin, as well as songwriters Justin Tranter and Julia Michaels, Stefani wrote the whole album in a few months and described it as a “breakup record”, with the songs having a “sarcastic” and dark-humor vibe, as well as being real, joyful, and happy.

The album’s official lead single, “Used to Love You“, was released on October 20, 2015, to a positive response from critics and a moderate impact on the charts. Its second single, “Make Me Like You“, was released on February 12, 2016. It received positive reviews upon its release, and its music video was the first video to be created live during the 2016 Grammy Awards commercial break.

Jordan Smith won the ninth season of The Voice with a combination of pop smarts and proud spirituality, and the same blend of talent and faith powers his first full-length. He handles chestnuts like “Over the Rainbow” and “You Are So Beautiful” with aplomb, and he transforms “Amazing Grace” into a mighty testimonial assisted by a gospel choir. Elsewhere, on his own “Stand in the Light” and on a cover of Christina Aguilera’s “Beautiful,” he lifts up listeners with his fearless, confident singing, which elevates even the simplest phrases into stirring statements.

Dark Matter is the result of our most in-depth writing and recording sessions we’ve done, and is something we consider to be our most dynamic and expansive album to date. This record completely defines and expresses who we are, and where we are going, taking the listener to the darkest and most honest places our band has dared to venture.

Kane Brown is an American country music singer and songwriter. He first came to the attention of the public through social media.[1] He released his first EP, titled Closer, in June 2015. A new single “Used to Love You Sober” was released in October 2015.

Bobby Bones and The Raging Idiots, the comedy group comprised of Bobby Bones and Producer Eddie from iHeartMedia’s The Bobby Bones Show, announced today that their full-length, laugh-out-loud album THE CRITICS GIVE IT 5 STARS will be released March 18 on Black River Entertainment. Today, Billboard exclusively broke the news, revealing that the 13-song disc, co-produced by Bobby Bones and Nick Autry, will also include a little help from the group’s country music superstar friends including cameos from Kelsea Ballerini, Lindsay Ell, Charles Kelley, Brad Paisley, Carrie Underwood and more

Pop and Homme began working on the album in January 2015. Pop reached out to Homme by text message to ask if he was interested in writing music together. After they spoke by phone, Pop sent Homme some lyrics by mail, along with notes about Pop’s time working with David Bowie. Three months later, Homme sent lyrics to Pop, and they agreed to work together on recording songs in a studio. They brought incomplete ideas as opposed to finished songs, so that they could work on them together. Pop described the album as discussing issues of what happens when your utility is at an end, and dealing with your legacy.[4][6]

Consisting of nine songs,[4][6] the album was recorded at Homme’s home studio in Joshua Tree, California, over the course of two weeks, and another week in his studio in Burbank, California. Pop and Homme self-financed the album.[1] Dean Fertita recorded guitar and keyboards, while Matt Helders recorded drum tracks. Homme stated that preparing Post Pop Depression was one thing that helped him cope with the aftermath of the November 2015 attack at the Bataclan.[4][6]

The album will be released on March 18, 2016,[7] and Pop and Homme will embark on a short tour to support the album after its release (including a one-off show on May 15, 2016 at the Grand Rex in Paris, France[8]). In addition to Pop and Homme, the tour will include Fertita, Helders, Matt Sweeney playing bass guitar and Troy Van Leeuwen playing guitar.[4][6]

They debuted their first song, “Gardenia”, on The Late Show with Stephen Colbert on January 21, 2016.[6][9] The song peaked at number 29 on Adult Alternative Songs.

iLoveMemphis’ debut single “Hit the Quan” was produced by Buck Nasty and released on July 4, 2015. Hit the Quan is a dance that was originally performed by Rich Homie Quan in his video for the song “Flex (Ooh, Ooh, Ooh)” which was released in April 2015. The dance Rich Homie Quan did in the video soon became a hit with numerous vines being produced portraying the dance. At that time, most people referred to the dance routine as simply the “Rich Homie Quan” dance. In July 2015, 3 months following the release of the song, iLoveMemphis released a song titled “Hit The Quan” which then became popular. He said that he spent $35 on making the song. The video for “Hit the Quan” debuted worldwide on November 12, 2015.[2] On December 18, 2015, iLoveMemphis’ second single “Lean and Dabb” was released on iTunes

Fan or not, anyone familiar with Dustin Kensrue’s activity over nearly two decades ought to know that the Thrice frontman and more recent soloist is an exceptionally talented musician. And while all-cover albums and live recordings may often be an interesting but ultimately inessential extra in an artist’s catalogue, worth the attention of devoted fans but not necessarily the casual listener, Thoughts That Float on a Different Blood is a hauntingly beautiful record that’s much more than the sum of its parts.

Recorded live during two shows at the Constellation Room in Santa Ana, California last December, the 35-year-old singer-songwriter’s latest solo album features a diverse selection of fresh takes on existing songs in a raw and intimate performance featuring only an acoustic guitar. The resulting cuts are pleasantly familiar at worst, and breathtaking at best.

Haelos debut LP, Full Circle, brings to mind the heyday of trip-hop and British electronic explosion. All of the genre’s biggest characteristics are here—ethereal vocals, muted breakbeats, swelling keyboards, and the occasional reverberating guitar. But Full Circle resolutely repurposes almost every aspect of ’90s trip-hop at no loss to its integrity or listenability. It’s both a total throwback and rooted in 2016, like a fermentation of ideas born 20 years ago and brought back to life with surprising potential.

Baauer is an American record producer of trap and bass music, best known for his hit song “Harlem Shake“.[4][5][6] He has been producing dance music from the age of 13, mostly making house music and electro.[2] He previously produced a track under the name Captain Harry, which was played by Kissy Sell Out on BBC Radio 1.[2] His influences include hip hop and dance music.[7] Baauer has produced remixes for Nero,[5] The Prodigy,[8] Flosstradamus[4] and No Doubt.[9]

Niykee Heaton is an American singer-songwriter. She was discovered through her YouTube channel after uploading acoustic guitar covers of contemporary hits, most notably hip-hop songs, which went viral. She released her debut project, an EP entitled Bad Intentions, on September 23, 2014.

Jaheim was signed by Naughty by Nature‘s Kaygee to Divine Mill Records in 2000, and released his debut album Ghetto Love in 2001. His second effort, Still Ghetto (2002), contains the hit “Put That Woman First” (2003), both of which achieved platinum success.[1] Jaheim’s third album, Ghetto Classics, was released on February 14, 2006, debuting at number one on the U.S. Billboard 200, and selling over 153,000 copies in its first week.

The span gap of six years between Underworld’s last studio album Barking and Barbara Barbara is the longest wait between records in their music career. Karl Hyde has said of the album: “When I listen to this record what I’m proud of most is that Rick and I made a record without thinking about where it fits or if it sounds like Underworld.”[14] The album was co-produced by drum and bass producer High Contrast, who previously worked with the band on Barking

Chaosmosis is the upcoming eleventh studio album by Scottish band Primal Scream. It is set to be released on 18 March 2016 on the band’s First International label, through Ignition Records.[1] The album’s lead single, “Where the Light Gets In”, was released on 1 February 2016 and features American singer Sky Ferreira.[2][3] The second single from the album, “I Can Change”, was released on 14 March 2016